You’d have to look long and hard to find a better definition for ‘active lifestyle’ than Frank Duffy.

As military veteran, a former green beret army ranger and and green beret combat diver, Frank, lives life with vigor. He started working out when he joined the Army in 1969 and never stopped.

With 11 years of Aikido, a year of Israeli Krav Maga and his current Brazilian Jiu-Jitsu practice he is no stranger to physical culture.

Frank is a also disciplined eater, an avid runner and is a role model for others striving to pursue better health and body.

With such an active lifestyle, we wanted to know why Frank sought out ForeverStrong to help him. We are proud to share this interview with our ForeverActive client of the month.

Frank wanted better results than he was getting on his own.
Like all of us, despite his passion for exercise, some things became more difficult for Frank over the years.

“The aging process hasn’t taken a huge toll on me. That said, there are some aging problems that I experience; for example, losing flexibility, minor joint pain and arthritis in my back.”

Frank was especially frustrated with a pattern of weight loss and weight gain and he wanted to find an exercise routine that he really enjoyed doing that would not exacerbate the aches and pains he was dealing with.

We remember Frank describing his goal to us as: “Waist Loss, not Weight Loss!”

Although he was dieting, jogging and lifting weights on his own he didn’t see the improvement in his physique that he was working so hard for. He also wanted more strength for his jiu-jitsu practice and more defined muscles.

Kettlebells? I’m not sure about that….

I overhead some of my friends talking about how kettlebell training could benefit jiujitsu, including our black belt instructor, Mike Johnson, who is a certified kettlebell instructor.”

Although he didn’t know much about kettlebell training and was skeptical at first, he had confidence in his instructors recommendation and decided to give it a try. 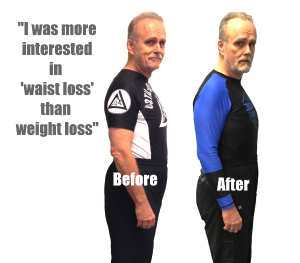 “{I like the}  the muscle that I’ve developed in my shoulders, arms, upper chest and legs.”

“My clothes are fitting better and my martial arts are improving because of the training!”

He loves the structure AND the people

“I’ve trained for a long time in a variety of different ways, and what I like best about ForeverStrong is the structure, I like the small classes and I like the trainers. They are all well trained and highly skilled people, and I appreciate that very much.”

“It has given me an exercise routine that is fun, has variety, and is challenging. My favorite part is being in class with other people who also enjoy the workouts…and the music in the background”

“If I had never joined ForeverStrong I would still be doing my tried and true exercise—jogging and lifting weights. Not seeing much improvement in my physique because of all the jogging and weight lifting. So my advice to you is, start training ForeverStong sooner.”

For more information about how to finally achieve the body you’ve always wanted with ForeverStrong call us at 301-452-5547 to schedule a complimentary consultation. We’ve helped hundreds of people in Fulton, Columbia, Clarksville, Highland, Laurel and Howard County and we’d love to help you too.

Hi. I’m Kelly Scott, the owner of ForeverStrong. And … END_OF_DOCUMENT_TOKEN_TO_BE_REPLACED